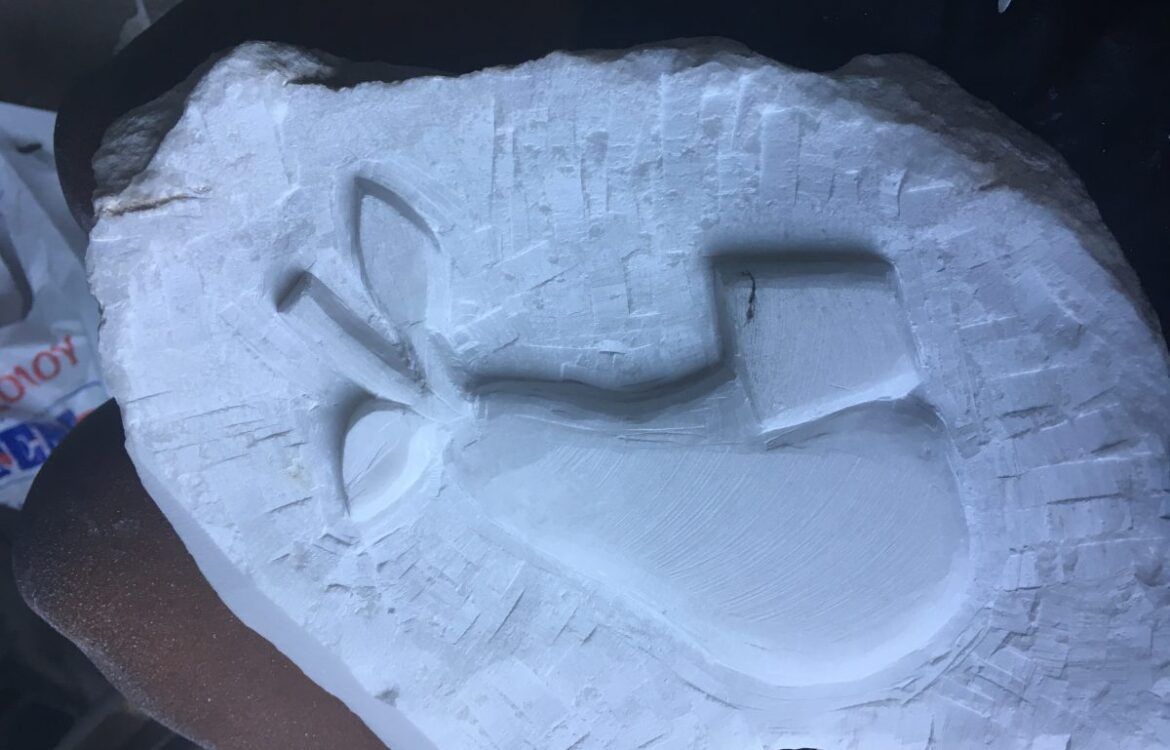 For eight weeks, I, along with many other CYA students, participated in a marble carving class in a studio in Pangrati, just around the corner from our apartments. There we spent three hours together every Tuesday evening carving, talking, and, at the end, sharing a meal and glasses of wine before heading back home. I was excited about this class the moment I heard about it — although I had never thought about sculpting, I considered it the perfect skill to develop in Greece. At the end of the eight weeks, I had a rough version of the sculpture I wanted to finish: a goat perched on a rock in the foreground, mountains and a shepherd’s hut in the distance (a scene inspired by rural Crete). I was disappointed to have to put down the chisel when all I saw was all the work to be done before I could consider this piece finished. As I packed the heavy marble block into my luggage, I considered my (not very promising) career as a sculptor to be at its end.

The roughly-carved goat came with me to Crete, where I stayed for two months to conduct thesis research in a village where I had worked and lived the previous summer with a field school. Shortly after moving into this village with members of the field school, Giannis, the local sculptor, invited us into his house for a coffee and a tour of his studio. Inside we saw a mixture of small, simple, and nearly identical pieces he makes in large batches for tourist shops, and large, highly detailed pieces he makes for exhibits and commissions and self-satisfaction. In this latter category were sculptures of horses heads with life-like folds of skin and protruding veins,  large wall-tiles with raised floral details, and a large sculpture of a hawk in whose beak is clutched a rabbit, wide-eyed, paws reaching for the ground.

When we rose to leave, one professor mentioned to Giannis that I had carved marble while in Athens. He responded with the suggestion that I return the next day to begin carving in his studio. Of course I agreed, excited to have something to do in the morning, typically a slow time in terms of interviews. From the next day on, I returned to Giannis’ studio daily to carve a wild pear and a glass of raki, two items to which I was often treated by villagers either in their homes, at feasts, or in the kafeneio (a traditional, usually males-only cafe).

When I started on the pear, Giannis was at my shoulder with critiques of my drawing and instruction in how he carves when he uses hammer and chisel (a variation on the method I had learned in Athens). After I got going, however, he returned to his work at the big stone-cutting saws, and we worked side-by-side for hours fully immersed in our work. There was never any pressure to talk nor any distraction from the stone. When the blades of the large saw were not working, the only noise in the studio was that of birds in the trees or, in the afternoons, that of sheep being herded into a pasture nearby.  This silence was only sporadically interrupted with conversation. Most often when one of us needed a break from the prolonged focus the marble demanded, he or I would sit quietly as the other worked, admiring the process and relaxing before resuming.

It was in this no-stress context that I came to appreciate the process of sculpting. Without any distraction, I focused on the angle at which my chisel hit the stone, how hard I swung the hammer, and whether the stone chipped away evenly. I started when I was in the mood to and left when my brain needed a rest, often returning later in the evening when I had nothing to do and I felt ready to continue. The pear was unfinished by the date that my return flight demanded I leave Crete, but I was still proud with my finished product. I left the pear with Giannis, knowing it to be in good hands. Upon my final departure from his studio, he invited me to return the next year to continue, offering to teach me how to use the stone-cutting saws when I next appear.

My (now more promising) career as a sculptor is looking up.