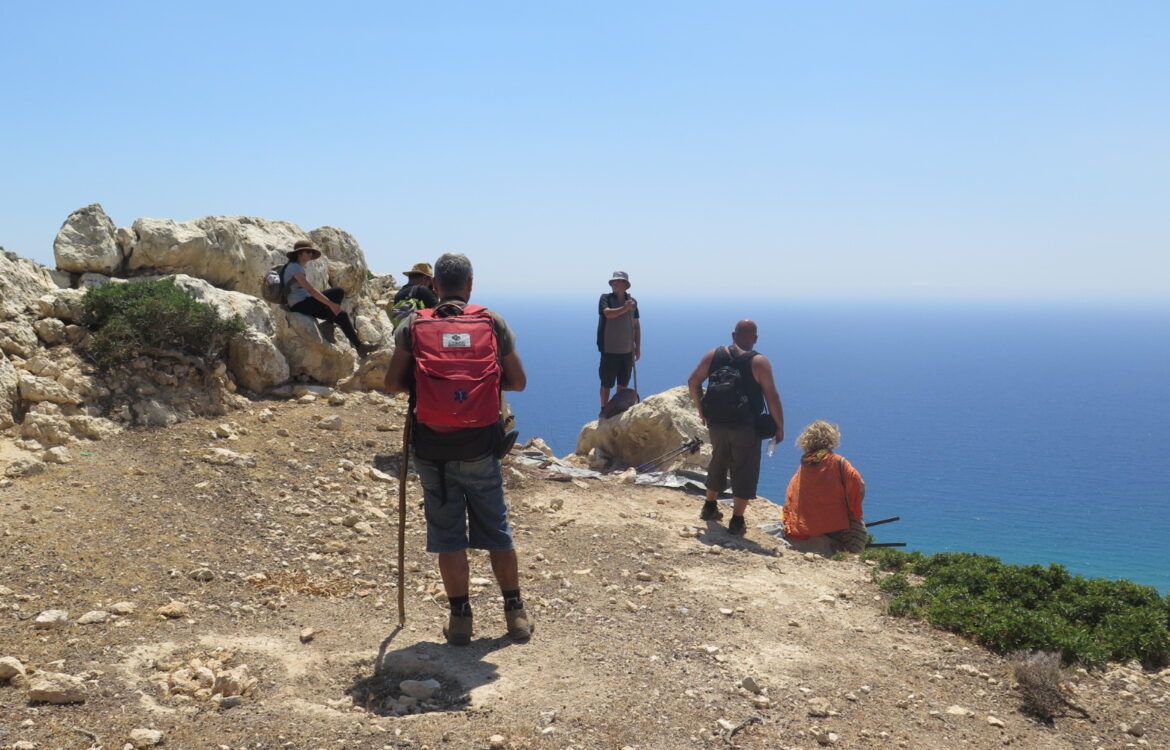 I went on my first organized hike in late February. CYA had been sending out weekly emails about upcoming events and activities in Athens, and week after week we received information about the Athens Hiking Club. Every weekend they went somewhere different and beautiful. When we finally received a notice of a hike in Evoia where snow-gear wasn’t required and the difficulty level was low enough for novices, Michaela and I decided it was our week.

When we arrived in Evoia, a large island off the coast of Attica, the sun was coming up and the bright light of early morning announced that it would be a great day. The seven-hour journey took us through a greatly varied landscape. Green and wooded during the first hours, as we increased in elevation, the dirt disappeared, revealing grey rock, and the leafy trees gave way to barren, bent, grey trunks and beds of moss. At the highest peak, we, the inexperienced CYA hikers, collapsed and struggled to get snacks out of our bags. The view from here was impressive; we could see other peaks around us as well as the green valleys we had left behind. Following this first hike in Evoia, my next organized hiking trip was in Crete with the  “Pezoporikos” hiking club of Heraklion. I had already been staying in Heraklion for two weeks at the time, and thought a hike would be a good way to meet people and to access parts of the island I might not otherwise see. Thankfully, this trip made the most out of the venture. On our way to south Crete, the bus stopped at a monastery where we spent thirty minutes touring the grounds and a folk museum they have on-site.

The hike itself wound through a landscape dotted with archaeological sites, churches, and pastoral land. It gave new perspective to the island, providing great views of Psiloritis, the highest mountain in Crete, and of the coastline. And although the hike itself was great, what got many of us onto the trail was knowing that we would end our hike at the Red Beach and Matala, where we would cool off with a swim.[su_carousel source=”media: 3081,3080″ height=”300″ items=”2″ pages=”yes” autoplay=”0″ speed=”700″]

The Red Beach is so named because of iron deposits in the sand which gave it a red color; it is a nudist beach and is known for the great number of carvings in the rocky edifices bordering the sea. In reality, the sand is a slightly coppery brown, but the detailed carvings were more than I expected. In the shapes of turtles, lions heads, human figures, eyes, Minoan-inspired oxen, these remains of visitors past give the beach its own character and make swimming nearby a delight.[su_carousel source=”media: 3085,3083″ height=”300″ items=”2″ pages=”yes” autoplay=”0″ speed=”700″]

Matala, only a twenty-minute hike from the Red Beach, is bordered by mountains and fronts a village popular with tourists. The beach is famous for being home to hippies who moved into caves above the beach during the 70s. In commemoration of this hippie history, Matala has hosted a music festival on the beach for the past four summers, and when we descended into the village, we found artists and children painting the streets with bright colors in preparation. This hike made the most of the journey, taking us both to great heights and then sea level, combining both a tour of natural and uninhabited Crete with a visit to historic and lively places.[su_carousel source=”media: 3088,3087″ height=”300″ items=”2″ pages=”yes” autoplay=”0″ speed=”700″]

I greatly recommend hiking as a way to experience Greece. Organized hiking trips proved to be great opportunities to see parts of Greece I wouldn’t otherwise have seen and to be in the company of people I wouldn’t otherwise have met. And on some more fundamental level, being outside and interacting with the landscape just felt good.  Both of these groups accept newcomers, are welcoming and informative, and often embark on hikes you wouldn’t find otherwise. If you prefer to strike out without a guide, however, I recommend Meteora, where shockingly shaped mountains are topped with monasteries, and Samaria Gorge a sixteen-kilometer hike through a unique landscape which empties into a seaside town and beach.