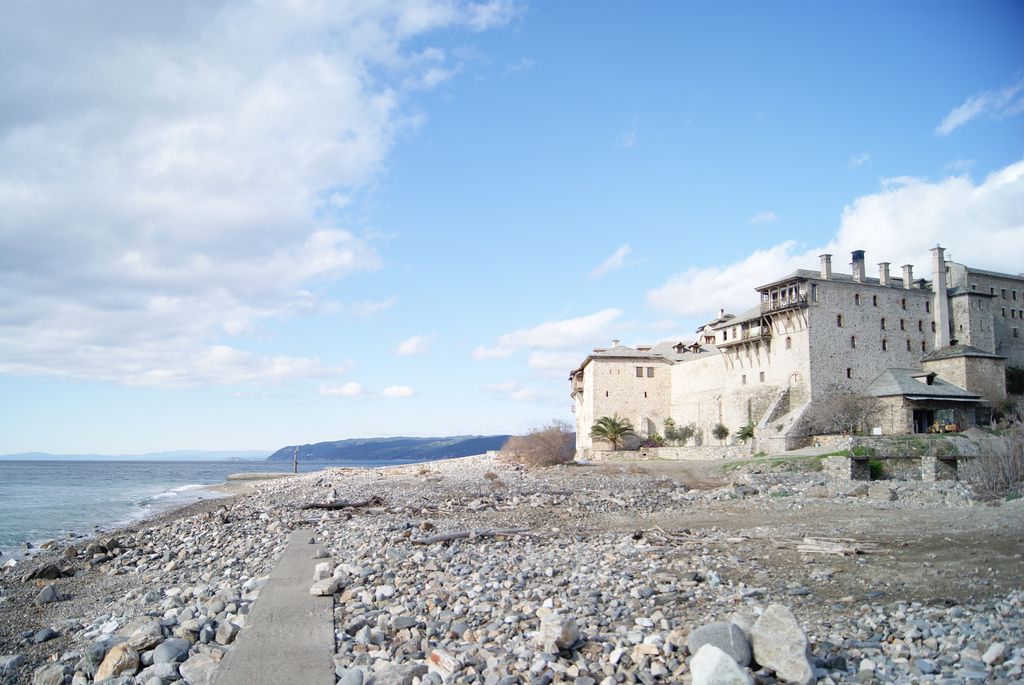 [Deacon Bartholomew (Michael Mercado CYA ’10), recently visited us at CYA while in Athens doing research for his Ph.D. We wanted to re-share a wonderful piece he wrote about his experience at Mt. Athos whilst a student at CYA.  Read about his interesting journey from CYA onwards in our recent blog “Crossing Paths”.]

Άγιον Όρος, better known as Mount Athos or the Holy Mountain to non-Greek speakers is a place filled with spirituality, serenity, and beauty. Truth be told, it is one of the most beautiful places in Greece which has remained relatively untouched for over 1,000 years. Whether you are a Christian or an atheist, Mount Athos is a place where no matter what set of beliefs you have, you can experience something that is beyond the temporal; something which enters into the realm of the infinite. In early December, six of us from CYA decided to make the trip to Mount Athos. Each of us had our own reasons that ranged from wanting to go on a spiritual journey to wanting to just learn about this place where a rule called “avaton” prevents women from entering the area. We were also a diverse group of people with varying lifestyles and orientations, consisting of Orthodox and non-Orthodox Christians, to deists, to people who had no particular faith. In all, we were not your average group of visitors to the Holy Mountain. We had to organize the trip months in advance in order to ensure that we could get our permits, monastery accommodations, and bus/ferry transportation and, though the process was a little laborious, it was well worth it. When we arrived, we immediately were struck with the Holy Mountain’s beauty and even some of the modern amenities. The port of Daphni has shops, a police station, a restaurant, and roads. At first, it seemed that Mount Athos didn’t exactly fit the idea of how the monks live “in the world, but not of the world.” But we continued on our journey to the monastery where we had made arrangements to stay the night. We soon found ourselves at Xenophontos monastery which is about a 2-2½ hour walk from Daphni. On days of good weather, the ferry usually makes several stops to monasteries on the way to the port of Daphni.

We arrived just as vespers (the afternoon service prayer) ended and thus all of the monks were heading to the trapeza (what the monks call the dining hall) to eat dinner. Though we had come a little later than expected, the monks quickly invited us to join them for dinner. Even though we were visiting during a strict fasting period, the food was delicious, warm, and filling. To be honest, all of us seemed to agree that the sourdough bread, wine and kiwis were the best parts of the meals. The night we arrived was the night before a major feast, so some of us elected to go to the vigil that the monastery was having. It must be said beforehand that any Orthodox service is not for the faint of heart. It is common that monastic liturgies last about 4-5 hours and this vigil was about 6 hours long with the Divine Liturgy commencing later for another 2 hours. Even though it is traditional to only be allowed to stay one night at each monastery, Xenophontos offered us a second night’s stay. During the time that we had outside of the services and monastery life, we were able to explore around the magnificently beautiful terrain of Mount Athos. From beginning to end the monks were kind, hospitable, and welcoming. As is tradition, they serve sweets and coffee when you arrive (or in our case since we arrived late, the next day). They were also willing to answer questions about Orthodoxy, their monastic lives, and even their own lives before becoming monks. We were also lucky enough to meet the abbot of the monastery and to have two English speaking monks who were born in the United States give us a history of Mount Athos and Xenophontos monastery, and answer any questions that we had. After spending two days on Mount Athos, it was time for our group to make the return back to Athens. We were extremely grateful to all of the monks for their hospitality, kindness, well wishes, and prayers. They had allowed us to enter their monastery, their church, and their lives while at the same time going the extra mile in hospitality by giving us rooms to sleep in and food to eat. They did all of this while keeping with the Athonite tradition of never charging people for these accommodations or the food, but rather offering these things out of “filoxenia” (love for the stranger/outsider). (There is a fee for the diamonitirion, or monastery visa, of ten euros for students.) As we left the monastery on the ferry to travel back to boisterous and fast-paced Athens, we had an opportunity to reflect upon what we had just seen back on the Holy Mountain. We had not only witnessed men of great faith offering their own food and shelter to strangers, we had witnessed the very essence of humanity at its best. In staying at Xenophontos monastery, even for only two days, we had the opportunity to experience what it was like to be a monastic living in the world, but not of the world. (If anyone wants to plan a trip to Mount Athos and needs some information on getting to Mount Athos, what to expect while you are there, the monastery of Xenophontos, or any other questions related to Mount Athos, feel free to contact me at: [email protected]).