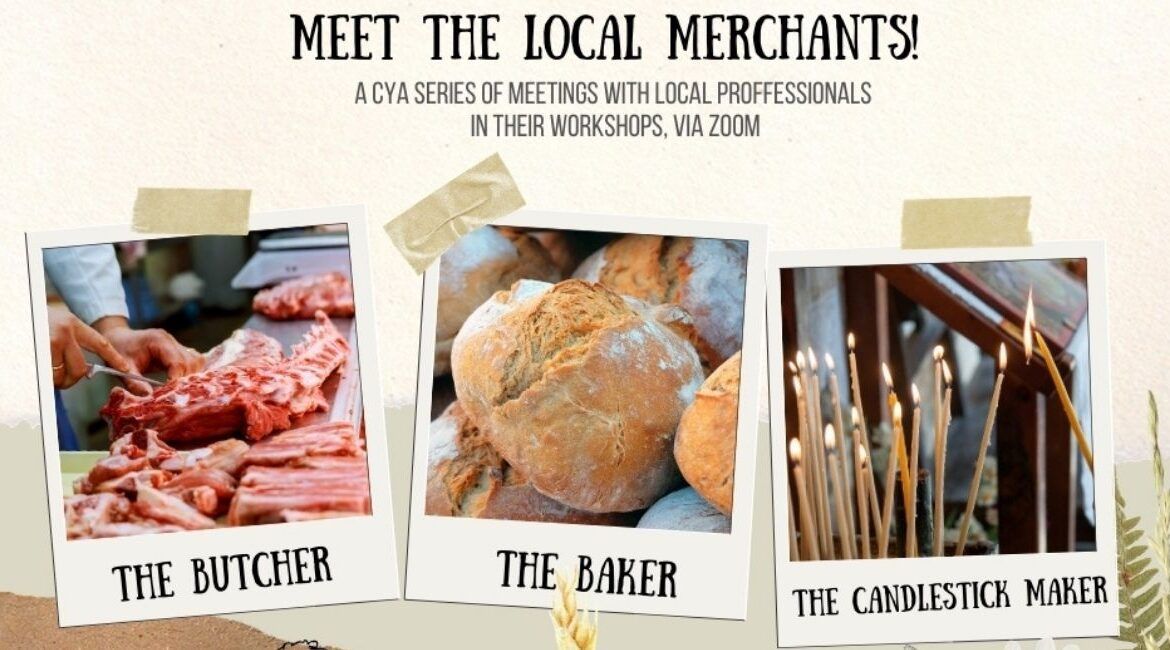 The Butcher, the Baker, and the Candlestick maker

Ask any of the CYA alumni about what they remember the most about their time in Greece, and you may be surprised that the awe-inspiring monuments, spectacular landscape, delicious food, and world-class museums, come after another element; The relationships they build with local people.

For Greek small business-owners and merchants, connecting with customers, visitors and neighbours is a major part of their daily lives. Every semester, they warmly invite CYA students in their shops, speak about their trade, and, as Greeks do, ask a lot of questions! At the end of the semester, students have built relationships with the local merchants, even friendships.

This semester, this process was halted due to a government-imposed lockdown aimed to slow down the spreading of Covid-19. Even though CYA classes successfully turned online, and CYA students had great adventures discovering the city in their free time, CYA President Alexis Phylactopoulos knew there was something important missing from their experience: the connection with the locals. He thus commissioned a project, organized by CYA Executive Director of Student Affairs Nadia Meliniotis; ‘The Butcher, the Baker, and the Candlestick Maker”, a series of online meetings with local professionals, merchants, and shop-owners, in their workspaces.

Spring ’21 CYAers first met with Niki Kotsari, co-owner of the Pnyka bakery, and daughter of the founder Dimitris Kotsaris. The bakery has received many awards for the quality of its bread. Mr. Dimitris has even been invited to Harvard University in 2008, to speak about his bread production and the benefits of the Mediterranean diet.

Niki Kotsaris spoke to CYA students about the history of the family bakery, their variety of bread, the nutritional value of their homemade products, and her personal love of the trade.

For the second session of the series, CYA students met with Panagiotis Markopoulos, an iconographer of the Greek Orthodox Church tradition, specializing in Byzantine Hagiography.

Panagiotis has worked in churches and monasteries, painting murals and icons. Some of them are in Agios ( St.)Nikolaos on the island of Hydra, Agios Meletios and Agia Napa in Corinth, and many more. Panagiotis’ shop in Eratosthenous Street sells ecclesiastical items, naturally-made candle-sticks, and his own paintings.

Panagiotis spoke to CYA students about the meaning of candles in the Greek Orthodox Church, he demonstrated and explained the use of incense, and analyzed elements of the Cretan School of Hagiography, of which he is a loyal disciple.

For the last featured trade, the Butcher, Nadia Meliniotis selected one of the most highly regarded Butcheries in Athens, Papoulias Butchery. The business opened in 1974 by the brothers Papoulia, in Varnava Square. It has since been the Greek Chefs’ go-to place for top-quality meat.

CYAers received a presentation by Efi Papoulia, daughter of the owner, who decided some years ago to leave a profitable career in journalism and commit herself to the family business. She brought her love for local produce to the shop and enriched it with high-quality products.

Efi passionately spoke about their daily practices, nutrition, the importance of fresh produce, and the importance of respecting the customer’s health. She introduced her father and translated students’ questions to him. “Working with him is a great school of learning”, She remarked.

CYA Students who participated had great things to say about the meetings! Now that shops have opened, some students have already met with those locals in person!

“My roommates and I loved learning more about the meat we eat here in Greece!”

I loved it! I learned a lot—I was especially amazed by the nature and extent of the work put into researching and making icons.