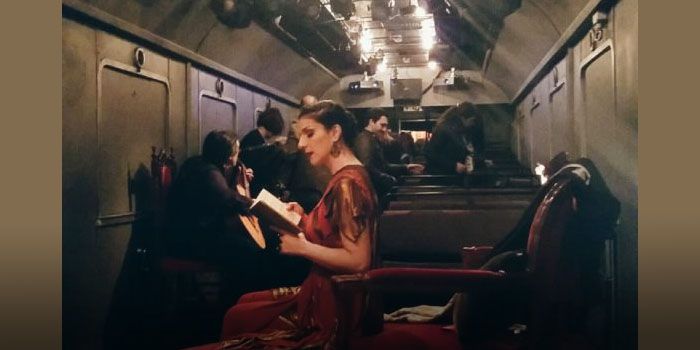 “Women of Passion, Women of Greece”

As we walked through old train cars to reach the stage of the play, my fellow CYA students and I were instantly intrigued by the uniqueness of the performance, Women of Passion, Women of Greece. Put on by the Theater Wagon of the Railway Carriage Theater (To Treno Sto Rouf) in English, this play captured my interest from beginning to end. Not only was the setting of the play unconventional, but there was only one woman acting in it.Playing three different women from Greek history, actress, Evelina Arapidi, gave a stunning performance as she seamlessly transitioned between such vastly different roles. The part of Medea, a sorceress of Greek tragedy, was full of sinister passion and power, while Melina Mercouri, a beloved Greek actress, was played with a light-hearted joviality, and still Maria Callas, a Greek opera singer, was portrayed with vigor and wisdom. Whenever the actress changed from character to character, moving through time in doing so, the train car would physically shake.

“…Often, we have an understanding of how something is going to be like before we even experience it. This time, it was different! As the train literally shook to transport us back and forth throughout time, I couldn’t help but realize that many of the stories shared on this journey can be still heard in today’s time as well. As a young woman who is soon about to complete college and go out into the ‘real’ world, I was reminded by the play to live out life with strength, grace and passion of course!” – Tenzin Chokki (CYA student)

We were amazed by this involvement in making the audience feel the play on a physical as well as emotional level. I was taken on a journey through important historical events of Greece and through the lives of women who loved Greece. Overall, the performance and all three women showed a vitality and passion for Greece that allowed me to not only learn more about this beautiful country that I’m living in, but feel the same type of love and passion that they felt toward their home here.