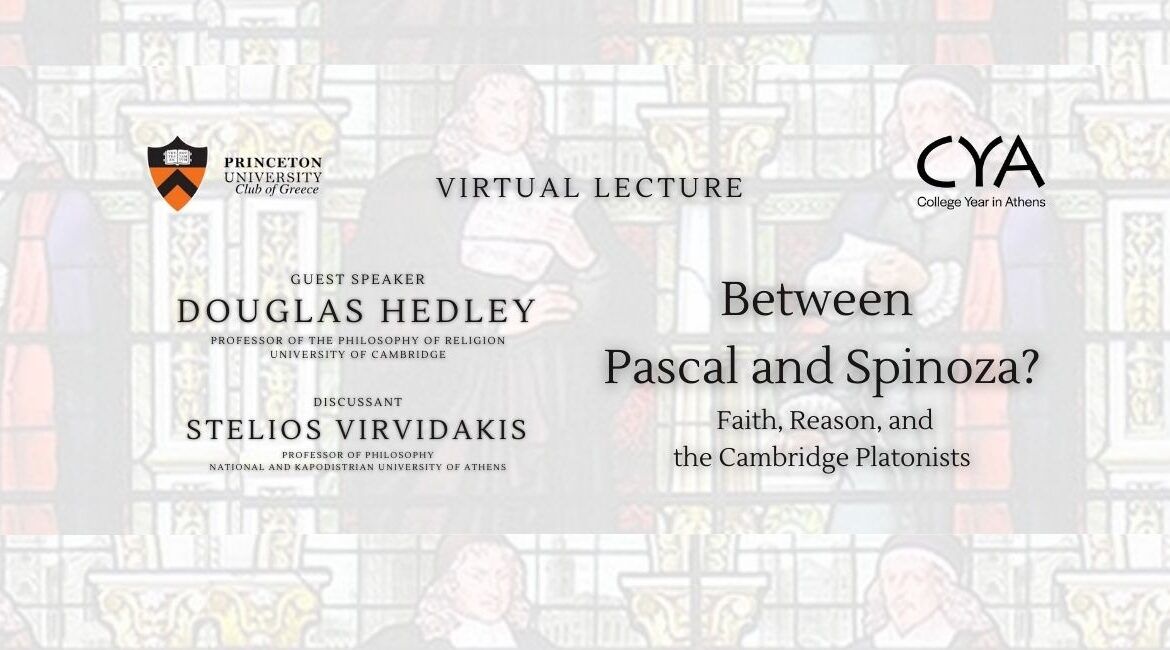 Between Pascal and Spinoza? Faith, Reason, and the Cambridge Platonists.

On Wednesday, 13 April 2022, CYA and the Princeton Club of Greece co-organized a virtual lecture titled ‘Between Pascal and Spinoza? Faith, Reason, and the Cambridge Platonists.’

Prof. Hedley introduced the lecture topic and the prominent philosophers to be studied: Blaise Pascal, Baruch Spinoza, and the Cambridge Platonists. He described both Spinoza and Pascal as thinkers in an intellectual milieu shaped by René Descartes, whom they were both heavily influenced by and yet critical of. “Although Pascal can be viewed as anti-modern, they are both philosophers articulating a vision of reality in a distinctively modern context.”

He went on to discuss the two philosophers’ views on the Divine and Faith, which differ significantly.

“It is the heart that feels God, not reason: this is what faith is. God felt by the heart, not by reason,” says Blaise Pascal, whereas Baruch Spinoza’s metaphysical relation between Human and Divine comes to contrast this view. The human mind has an adequate knowledge of the eternal and infinite essence of God…Hence we see that God’s infinite essence and his eternity are known to all (Ethics, II, 47).”

After offering many engaging quotes that allowed him to discuss the two philosophers further, Prof. Hedley began his second part of the lecture with a fascinating introduction to the Cambridge Platonists, a group of philosophers and theologians he has studied extensively. “One might describe them as the first modern Platonists,” he remarked.

Prof. Hedley went on to discuss the views of Benjamin Whichcote, John Smith, Henry More, and Ralph Cudworth – the Cambridge Platonists – on fundamental topics such as the soul, reason, ethics, and the self. In his concluding remarks, he suggested that, although the Cambridge Platonists’ philosophy does perhaps “lack the radical consistency of either Pascal or Spinoza,” their thinking opens territories that are still important today. “Such an enlarged and elevated vision of the goodness of reason and the transformative power of the Spirit has an abiding relevance in our own age.”

After Hedley’s presentation, Prof. Virvidakis took the floor to express his gratitude and fascination with the topics discussed and posed a few questions to the speaker, sparking a passionate conversation. The discussion was also opened to the audience, with questions posed by people of various levels of familiarity with the subject.  A lively discussion engaged the participants for the last part of the event.

For a complete recording of the lecture, see the video below