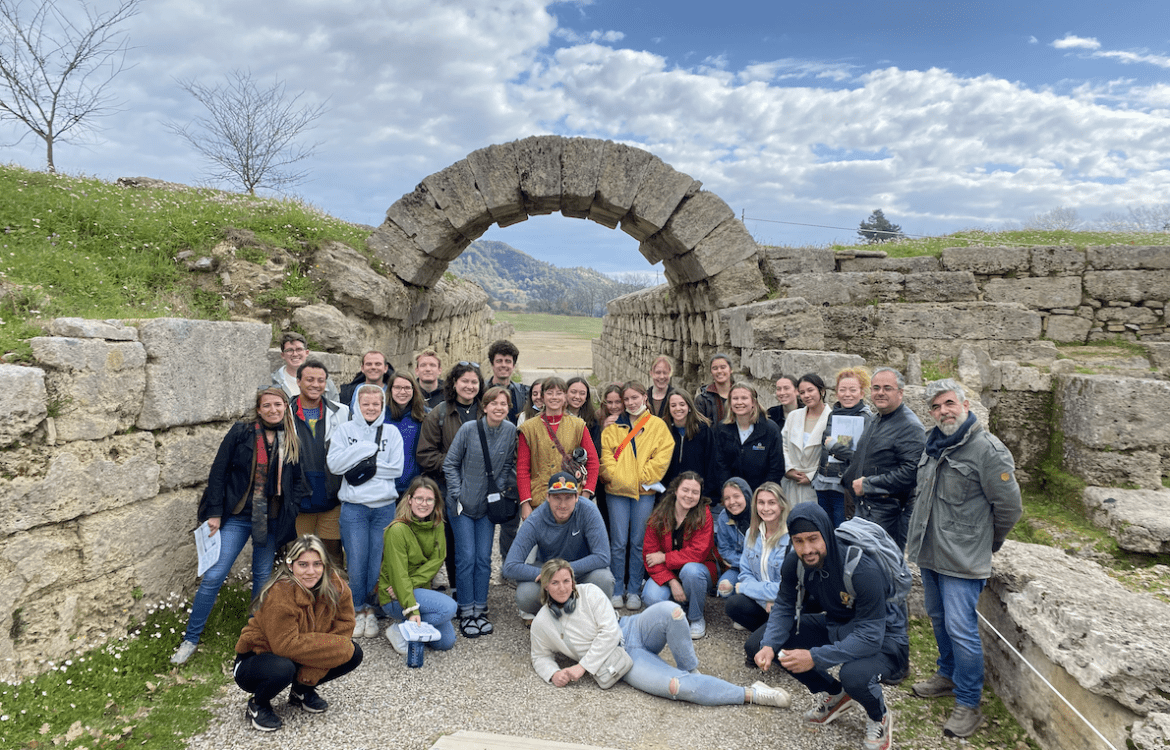 Outside the classroom and into the world of Greece

Take a peek at what students did on CYA’s Spring’22 Peloponnese field trip!

Last week, students set off on a 5-day field trip to the Peloponnese, the peninsula on the southernmost part of mainland Greece. Five busses full of CYA students, faculty, and staff crossed the famous Corinth Canal and started making the way across this diverse, history-rich peninsula.

The study program was designed to combine the Historic with the Contemporary, combining lectures at important historical sites with meetings with local people and small businesses, discussions on Greece’s more recent past, and global reflections on history and politics.

Students followed on-site classes according to their courses and specialist study areas led by Professors Iosif, Karavas, Kritsotakis, Ozturk, Papadopoulos, Papathanasopoulou, Pitt, Placas, Tsivikis and Vasilaki. The five groups journeyed through the Bronze Age, Classical Antiquity, and Late Antiquity in the Middle Ages visiting key sights including Mycenae, Nafplio, Pylos, Epidaurus, Olympia, and Mystras. Students witnessed the influence and effects of the Byzantine Empire, Frankish, Venetian and Ottoman Rule, and learned about the key figures in the Greek War of Independence and the birth of Modern Greece extending to the architecture, urban design, and social challenges of Contemporary Greece.

Between this historical exploration, students had the opportunity to come into contact with local people and areas of production. Some visited a Honey Farm in Olympia, others an Olive Press in Nemea, or a winery in Argos.

CYA student Elena Rabin kept a journal throughout the trip, here is a day in the Peloponnese through her eyes:

“Day 3 in the Peloponnese started with a visit to the Diros Caves, a system of coastal caves with impressive stalactites and stalagmites on display. The caves contain evidence of being home to an early settlement, and bones of tigers, bears and even small hippopotamuses have been found there! Then we continued on to the village of Areopoli, in the Mani region at the edge of the Peloponnese. There we discussed the concept of vendetta and regional codes of honor. Vendetta is essentially revenge and honor killing between families as the result of some kind of shame or blow to pride. It is common in Mani, and also the island of Crete. After that, we drove to Oitylo to see a monastery full of incredible iconographic paintings and a bay notorious for piracy. Our last stop of the day was for a late lunch in Kardamili where we were treated to fried cheese, greek salad, and lots of meat for Smoky Thursday, the day before the start of Carnival where it is customary to eat a lot of meat in anticipation of the beginning of Lent“.

Here’s a list of some of the sites and locations students visited on the Peloponnese field trip: