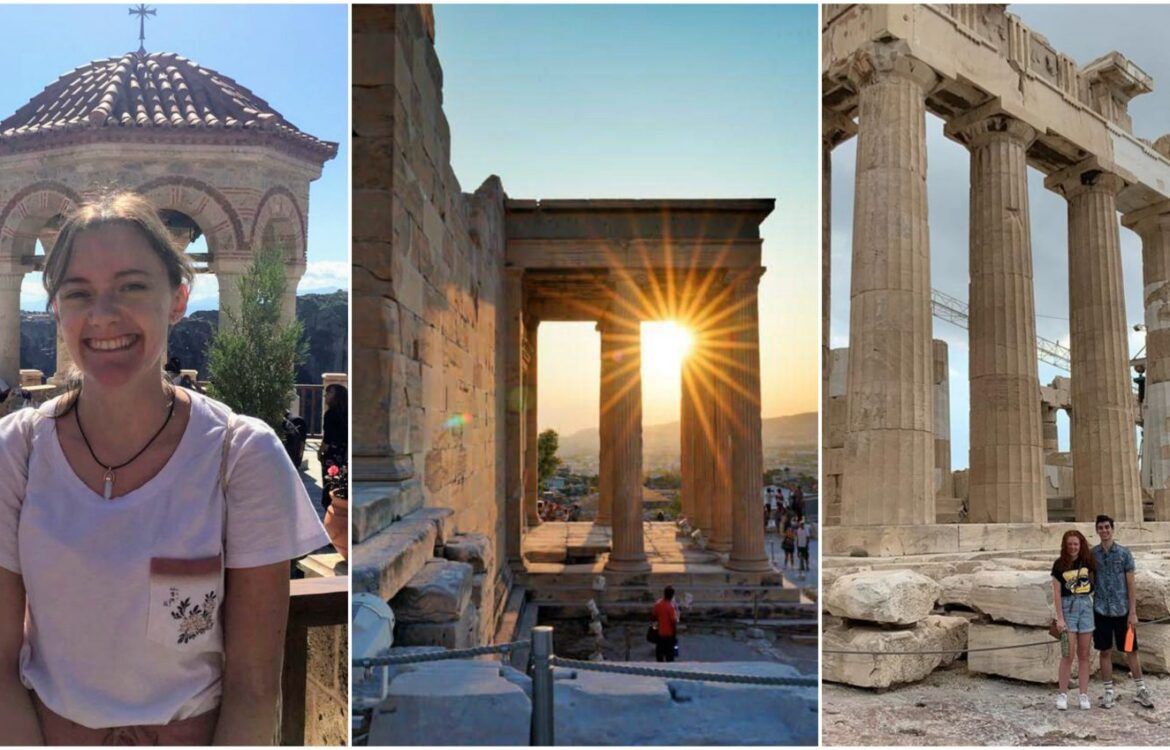 Imagine leaving your home country for college and spending the following years picking up the customs and cultural practices–maybe even a language–of a new place. Now imagine traveling away from that school to take part in a study abroad program…and learning all over again. How would you feel? How would you adjust?

This fall semester, three CYA students are in this exciting position: attending an American college abroad from home, and then spending part or all of this academic year in Greece. Here, they share what’s stayed the same across their travels, what’s unique about Athens, and the strategies that have helped them through it all.

Anita taking in the scenery at home in England.

As a classics major, Anita, originally from England, knew that Greece would be an incredible place to learn about the discipline in depth. But she wasn’t sure what her experience would be like returning to Europe to study abroad. She has noticed similarities between her home country and host one, like the use of the euro as currency or restaurant etiquette. That’s made her a great source for tips during taverna outings: “I would explain to people that in particular if you have a large group, bread will be used to almost cover the tip cost, which is something a lot of people didn’t realize.” At the same time, Anita has loved exploring the Mediterranean, an area she hasn’t traveled in as much compared with other parts of the European continent. Besides her time in Athens, where she’s enjoyed talking with locals about dining and activity recommendations, she has trips planned to Egypt, Israel, and Turkey! Anita feels that her international experience has made transitioning to Greece much easier–something she didn’t fully realize until she heard from other students abroad for the first time.

Rachael strikes a pose in her home country of Scotland.

Rachael, a student of religious studies, gender studies, and inter-group relations, was eager to study mythology–a subject not offered at her home college–with CYA. She describes her transition to Athens as “extremely different” from moving from her home in Scotland to the United States. “Study abroad can feel like a temporary setting which can throw you completely at first, but that’s what makes it so exciting,” she says. For Rachael, that initial feeling of being “thrown” came from living in a city like Athens for the first time, which she observes is more expansive and active than other places she’s lived. Keeping an open mind and sharing stories with locals are strategies that have helped her immerse herself in the area, which she praises for its beautiful weather. Before Rachael leaves Greece, she’d love to see more of the countryside, which piques her interest being from Scotland’s Highlands. “Sometimes it’s easy to forget how diverse Greece’s landscape is,” she adds, “but there’s just so much to see.”

A picture by Stephanie of the garden inside her high school in Nanjing, China.

Stephanie’s favorite part of studying in Greece? “Life here is really free,” she says. Stephanie, who calls China home, is fascinated by religion and mythology, which led her to Greek culture and then to CYA from her American college. A self-described “adaptable” student, she loves the atmosphere of Athens, and doesn’t feel that she’s faced any barriers to getting involved with city life. “You can just be yourself [here] and be really different from the others, and it’s not really a big deal,” she thinks. She is an avid traveler, counting Japan and Italy as well among the countries she’s visited, and hopes to see the sites of Delos and Olympia during her full year with CYA. In fact, being able to engage in person with Greece’s past has been an important part of Stephanie’s transition to life abroad. She counts field studies–very different from the experiences in day-to-day life at her home college–as standout moments from her time so far. “I really want to feel the real, touchable connection from this world to the other world,” she says. “It’s really magical.”