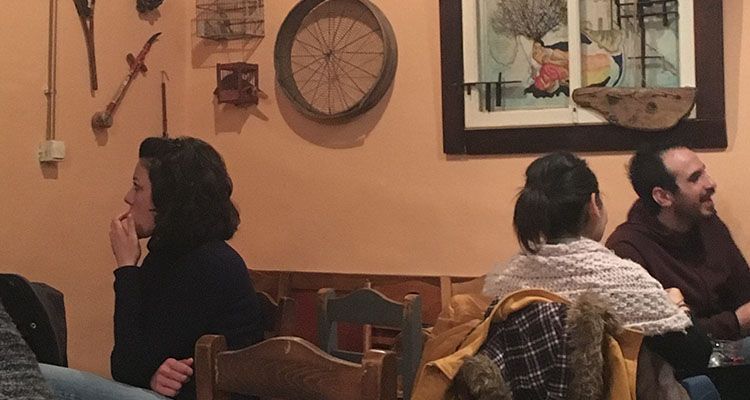 Kafeneia are small cafes where men gather to pass the time, often swinging komboloi, “worry beads,”  in their hands. They are vital in small villages. In the village in Crete where I lived for a month, there was no proper store for food or necessities and not even a taverna, but still, there were two kafeneia and often these were full.

Even in Athens, you see them around. That there are only old men inside usually gives them away; many times the storefront has no name or will simply say kafeneio; and often there are one or two tables out in front with chairs facing the street, not the table – people-watching is one of the big attractions in these spaces. But still in Athens, these are male spaces. And if you are a woman and you bring this up to a young Greek man, as I have, they will likely tell you that you are not missing much. And if you are still like me, that won’t be satisfying, and you will want more, to go and pass the time.

For such women, I am happy to report that just a short walk from Kerameikos Metro Station in Gazi, one passes into Metaxourgeio, where there are many kafeneia which are fully open to women. These are not the traditional kafeneio which serve only coffees and spirits, but are like a mixture of a kafeneio and a taverna – they serve small plates of food!

In the first kafeneio I passed, there was a traditional puppet show going on which my friend assured me is typically very funny, and often for children. He said that he had never seen this before in Athens, only in villages, in spite of living here for years. We walked on only because it was so full, and because I wouldn’t understand any of the jokes.

In the next kafeneio we found sat young, co-ed groups enjoying small dishes and drinks. We found a table and ordered rakomelo, warm raki with honey (it has a flavor which is distantly reminiscent of hot apple cider), and feta bougiourdi, a block of feta cheese baked in tomato sauce with oregano, olive oil, and slices of peppers. Delicious! And now I am fully satisfied. Feta bougourdi, a perfect companion to a glass of warm rakomelo