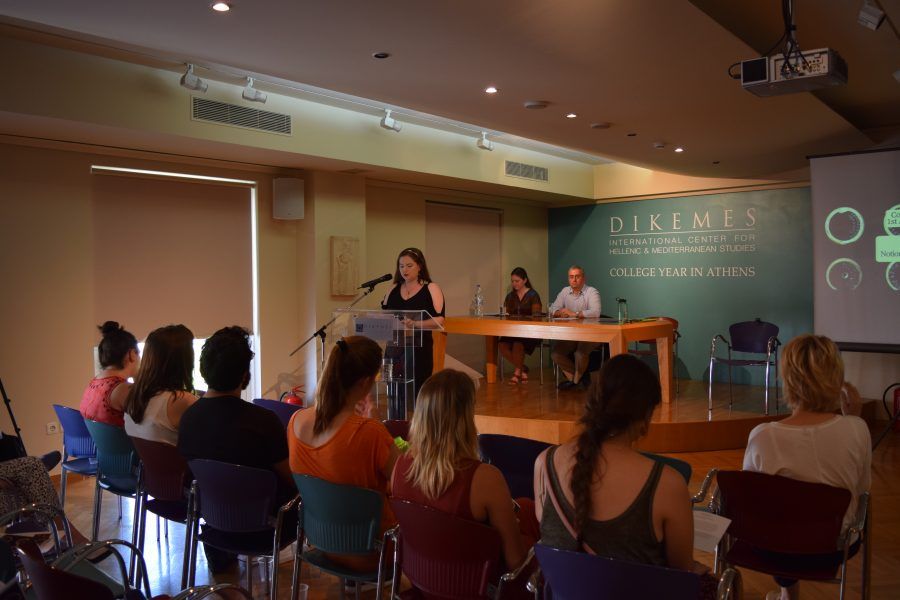 Our inaugural CYA Student Conference themed “Greece and Beyond: Notions of Identity in the Greek World,” took place on May 3 and 4 at the CYA Academic Centre.  The conference explored the essence of what it means to be Greek, and why people need to identify themselves as Greek. Keynote speaker at this year’s conference was Dimitris Christopoulos President of the International Federation of Human Rights (FIDH) and Associate Professor at Panteion University of Athens. Drawing from his background in legal and political theory, in particular issues related to human rights, minorities, migrants, and citizenship, Dimitri’s day two keynote: “Being Greek: History, Norms and Practices Relating to Greek Citizenship from the Formation of the Modern Greek State to Contemporary Realities”  addressed how questions about citizenship resonate with themes and issues beyond the narrow legal bond between state and the individual, and how this can further our understanding about the community and the polity itself.

The first day of the conference began with a welcome and opening address by Conference Committee Member Theoni Scourta and Chair Demetrios Kritsotakis. It featured Kelly Platt presenting Ritual and Female Identity in Ancient Greece, Jamie Dawes with Losing My Religion in a Growing Empire: Introduction of Foreign Cults and Athenian Identity, followed by Margaret Corn presenting The Binary Paradox: Self-Representation and Identity in the Satyr of Attic Pottery. The second day of the conference commenced with an introduction by Kostis Karpozilos. Four students presented their papers: Sophia Kiernan with The Pope’s 2001 Visit to Athens: The Challenges of Religious Identity in Greece, Alyssa Mendez withUnder the “Koukoula”: The Many Competing Faces of Greek Anarchist Identity, Melissa Ballow with Who Tells Your Story: How the Publishing Industry Shaped the Greek Fantasy, and Andrew Hosler concluded with The Effect of the Greek Diasporic Community in France on the Modern Greek Enlightenment.

The conference for the first time offered CYA students an exclusive opportunity to present and discuss their academic research, share their knowledge and engage in discussion in an open forum, creating an important channel for the exchange of information between students and academics. Other highlights of the conference included a presentation by Guest Lecturer – Valerie McGuire and closing speech by CYA president Alexis Phylactopoulos.

We thank all students who participated and contributed to the success of our first student conference, as well as the hard work and efforts of the conference committee in developing and planning this event. Looking ahead to next year’s conference, we hope to steadily gain momentum, expanding this annual event to a learning community made up of CYA students committed to enriching their academic experience whilst studying in Greece.