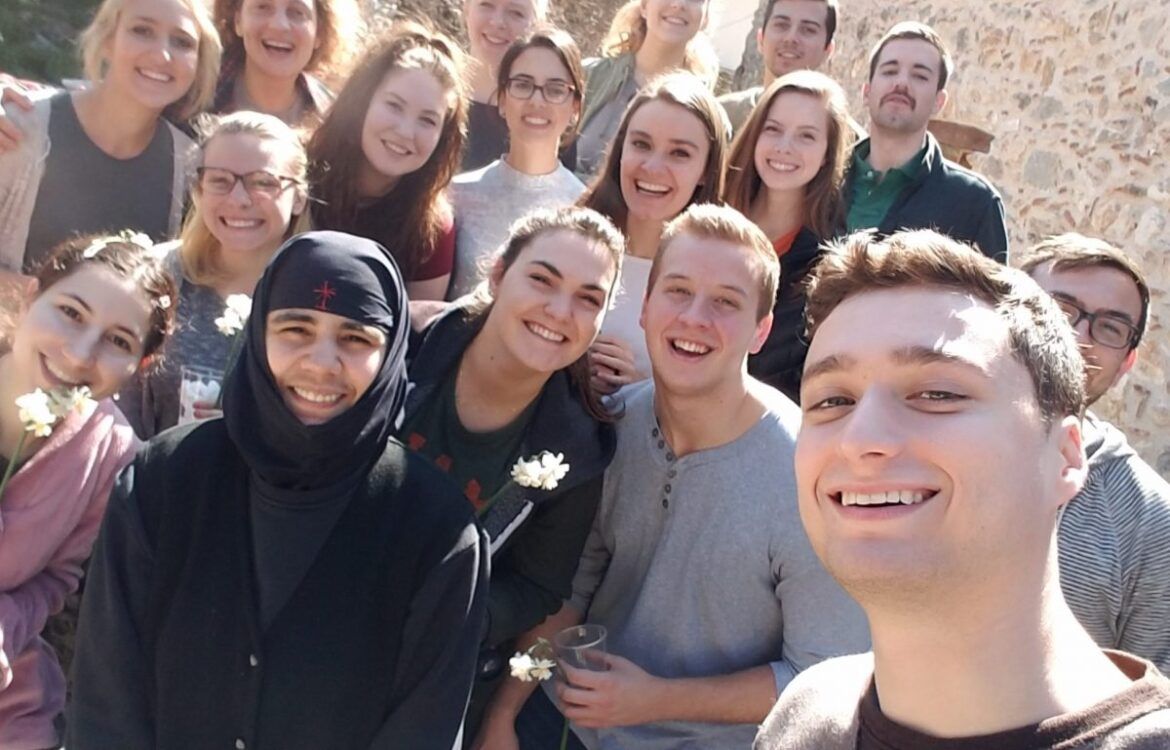 I Became a Nun for a Day

Just kidding! The above did not actually happen. No technology, fasting, constant prayer, solidarity, and did I mention no technology?! Definitely not the life for me. But for some, that sounds like the perfect cup of tea.

Professor Isoif teaches the Greek Orthodox Class here and is good friends with one of the nuns at the Agios Ioannis Theologus Monastery.

Upon arrival, we were taken to the edge of the property to take in the view of the monastery. Monasteries are often built where they have some beautiful view. We then entered through the main gate and saw the line of rooms that the nuns stay in as well as the sanctuary, which was the focal point of the grounds. Inside the sanctuary there was the typical donation box with the candles to light and a siting area surrounded by windows. Then through a small door we entered into a small sanctuary with chairs lining the walls and frescos painted from the top of the dome all the way to the ground. There is no artificial light in the sanctuary, only candles and natural light.

After the tour of the chapel we were gathered into a circle to ask any questions, an inside look that most people don’t get. We all sat on the ground with Nun Nektaria and Professor Isoif at the head, Professor Isoif had to translate Nun Nektarias’  answers because she only spoke greek. Before starting we were offered rugs to sit on instead of sitting on the ground, and she also brought out bottles of water and glasses as well as Turkish delights and cookies for us to snack on. She even took the time to serve us all individually and offer us seconds. During the interview we asked the basic questions such as: What does your typical day look like? How long are your services? What time do you wake up in the morning? Nun Nektaria wakes up at 6 am every morning, it used to be 4 am but the time was difficult for the older nuns. Then they have service, chores, cooking for the meals, and individual prayer time. During their meal times, one nun does not eat and reads from the bible while the others do. For their services, the nuns need to have a male priest come and preform the service, in the Orthodox church women are not allowed to perform the services. The nuns were also no allowed to leave the monastery; although they were allowed visitors. They also rely on visitors to bring them food since they cannot visit the market. At the end of our visit, Nun Nektaria offered us all flowers freshly picked from their garden. There had been a drought which limited the amount of flowers that had grown that season but nevertheless, she still offered them to us. The kindness was so refreshing and when we left she said that we were all very special. It was an interesting experience that I am lucky to have had. Not many people get to interview a nun.